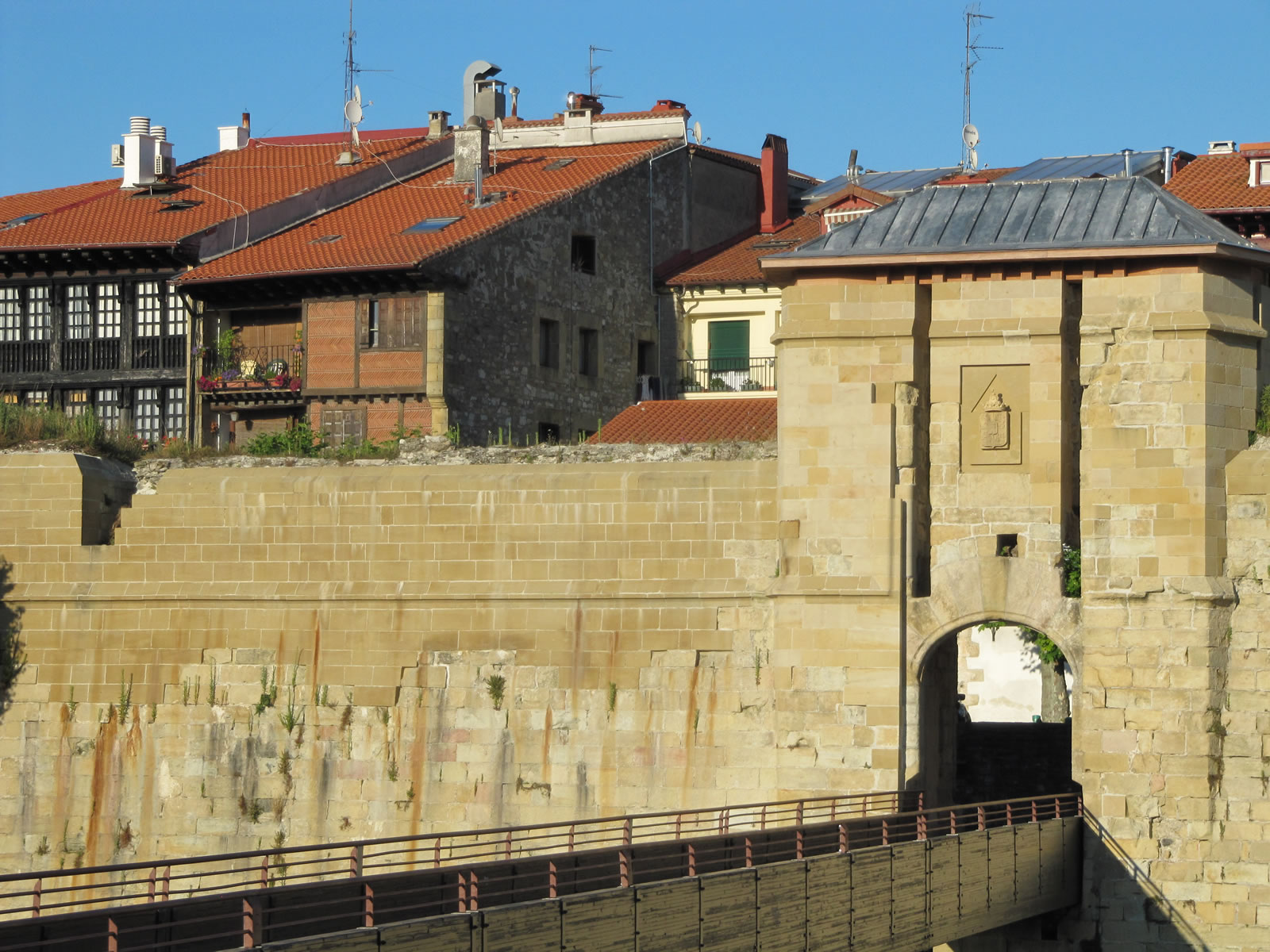 Located along the hills of the Urumea river, only eight kilometres from San Sebastian, Astigarraga is known as the cider capital of the Basque Country. Despite its small size and population of only 5,000 who live in a few quiet residential neighborhoods, it boasts almost two dozen cider or sidra houses called sagardotegis with a long tradition of celebrating the annual cider harvest.

Sidra or cider is a popular traditional drink made from fermented apples. Before the Romans made wine, cider was a beverage enjoyed by many ancient cultures from the Greeks to ancient Egypt and Byzantine empires. In Gipuzkoa, a special autoctonous apple is used to make cider. The local cider production was in decline for many years, but thankfully has recently seen a resurge in popularity that respects traditional production methods. The small, hilly terrain of Gipuzkoa is difficult for large machinery to manage, hence it requires more manual labour to harvest the orchards – thus production is very limited and most of the local sidra is enjoyed locally.

For four months during the year, from January to April, Astigarraga is extremely popular with locals who come in droves by bus load to enjoy this traditional past time. In Gipuzkoan sidrerías, guests are served traditional fare and all the sidra you can drink. Everyone serves themselves from the giant sidra barrels (barricas), filling their glasses artfully by angling them just so and catching the quick blast of sidra in the cup. The gesture of “breaking the cider” oxygenates the liquid and brings out the full flavor of the apples. Slightly acidic, and not sweet Basque sidra takes some getting used to for those who have never tried it, however, it goes well with the ambiance, the meal and after a few attempts at the txotx where the sidra is poured out, one can quickly get a hang of it. Once your glass is filled, it must be drunk quickly. Don’t worry if you get more cider on the floor than in the cup, it takes practice. Plus, the locals are more than happy to share with you the “technique”. While alcohol content in sidra is relatively low from about 3-8 percent, locals indulge in the ‘all you can drink’ festivities over long lunches, many eventually break into local song. The buses are tours booked by local tour groups to make sure everyone makes it home safely after an afternoon enjoying sidra.

In addition to sidra, sagardotegi’s serve a hearty meal of tortilla de bacalao, fried bacalao with roasted green peppers and grilled chuleton or a giant t-bone steak. If you are interested in taking part of this spectacle – and you come during peak season, be sure to reserve a spot in advance, popular sidrerias get booked up weeks in advance. Some establishments are open all year round but as always, best to call ahead. The beginning of the season is marked by a festival where they tap the first barrel of sidra, the city is filled with ambiance, rural fairs and traditional contests.

If you are here for a sidreria visit it may be the end of the route for you. But, if you are just passing through, the town of Astigarraga is also worth exploring, it’s a small circuit you can take prior to or post indulging in the sidreria experience. Walk to the Chapel of Santiago up the Santiagomendi mountain so you can enjoy the panoramic views. You can also explore the nearby Ethnographic Park Santiagomendi where you will see traditional instruments for harvest and cultivation.

The parish church of Santa Maria de la Asunción (Our Lady of Assumption or also known as Saint Mary of Murgia), is at the top of a hill called Marksmendi, inside is the tomb of the Seniores of Murguia.

And of course, there is a sidra museum in town, called Sagardoetxea, it’s a good stop to learn more about the traditional meathods of making cider. You can take a  tour of an apple orchard, read about the history of the apple harvest, enjoy tastings and purchase a bottle of sidra or two. They also sell excellent fresh squeezed apple juice and dessert liquors.

Leaving behind the lands of sidra we head to the coast, the next stop along the route is Pasaia or Pasajes, the main working port of Gipuzkoa. Pasaia bay is one of the few natural fjords along the Basque Coast. Here the mountains Ulia and Jaizkibel descend into a busy commercial and fishing port that hides a few secret charms.

Arriving in Pasaia you pass an unattractive but functional shipping port, head to the Pasai Doniban (Pasajes San Juan) to take a step back in time to what the city was like hundreds of years back. To get here, take the Pasai San Pedro and head to the end of the port. From here you can take the ferry to cross over to Pasai Doniban. It costs spare change to get across the bay and the ferry makes several trips back and forth.

Once on the other side, you will find the previous home of Victor Hugo, who fell in love with this small neighborhood and lived here during the summer of 1843 in one of the fishing homes that lines the streets.

Pasai Donibane is lined with interesting houses and temples, picturesque restaurants and coastline that branches out. Near the main plaza you can enjoy wonderful, fresh seafood and shellfish. If you are interested in a stroll, follow the route to the ocean along the coast for a hike that takes you along the cliffs. There are hiking routes up to Mount Jaizkibel that start from here, hidden coves for swimming, sand stone cliffs that are popular with mountain climbers, a bar that serves up drinks and sometimes they offer menu del dia and bbq. It’s super scenic, quaint and easy to enjoy a sunny afternoon in this area. There is much more to see so if you would like to continue on, head back to San Pedro for the rest of the route.

Back on the other side, from San Pedro you can visit the Ondartxo Maritime Museum, a former ship building yard turned museum, next to it is parked the old steam boat Jaizkibel. Along with this historic steam boat the Naval Museum has various replicas of traditional Basque vessels. Finally, the Barco Museo Mater is a traditional tuna fishing ship that offers guided visits on foot and by sea to get to know the bay. With a long sea faring tradition, this part of the coast offers a little bit of everything for history and nature lovers.

By far the grandest city along this route is Hondarribia, once called Fuenterrabía, seated at the mouth of the Bidasoa river, right along the borders between France and Spain, Hondarribia is a maritime town and also an important tourism center. Its walled casco antiguo is filled with noble palaces and has been declared a historical monument.

At the highest point of the old town, is the Plaza de Armas. From here you can enjoy views of the city and the ocean below. On one end of the plaza is the Castle of King Carlos V, a stone fortress that is now a Parador. The Paradors are government owned properties from ancient castles and palaces which have been converted into hotels. This particular Parador has a spectacular ambience, the luxury hotel gives you the option to sleep in a room fit for a king. Or you can simply choose to have a coffee in the scenic terrace.

In front of the Parador, every 8th of September the locals celebrate the traditional Alarde, the most important festival in town, which began in 1639, commemorating the victory of the Spanish over King Louis XIII. During the battle the locals gathered by the church of the Virgin of Guadalupe and prayed that if their side won they would have a fiesta in her honor every year. After 69 days of intense battle, Hondarribia came out victorious and to this day the festival is celebrated, filling the city with local parades and costumes.

Next to the Plaza de Armas is the Parish Church of Santa Maria of the Assumption, built in the fifteenth century gothic style, the tower is baroque from the eighteenth century.

Throughout the old town, with its cobble stone streets you will find numerous palaces and noble houses. The ancient city walls can be admired at the Puerta de Santa Maria. Calle Mayor is the main artery of the casco where you will come across the city hall, Palacio of Casadevante and the Palace of Zuloaga, with a magnificent wooden stairway and the House of the Guevara from the eighteenth century.

Leaving the walled city, you can walk along the popular neighbourhood of La Marina, filled with great bars, restaurants and charming ambience all day. The houses painted in traditional fishing village colors, offer terraces add to the charm of the area.

Hondarribia also has a pretty beach that separates the La Marina neighbourhood from the fishing port. At the port you can hire boats to visit the Castle of San Telmo from the sixteenth century and the Higuer lighthouse for some beautiful views of the coast. When the beaches at Hondarribia get filled up over the summer, locals will often hop on one of the regular ferries over to Hendaye on the French side with kilometre long beaches that offer more space to soak up the sun.

Finally, at the foot of Mount Jaizkibel is the Fort of Guadalupe. An important defensive building located right next to the chapel of Guadalupe that was built in the sixteenth century to honor the Virgin of Guadalupe who watched over the city.

Over the summer Hondarribia hosts many cultural festivities, and outdoor concerts from the city fiesta, yes every city in Spain has their own dedicated fiesta to a Blues festival that attracts international groups.

Religious adventure in The Sanctuario Route