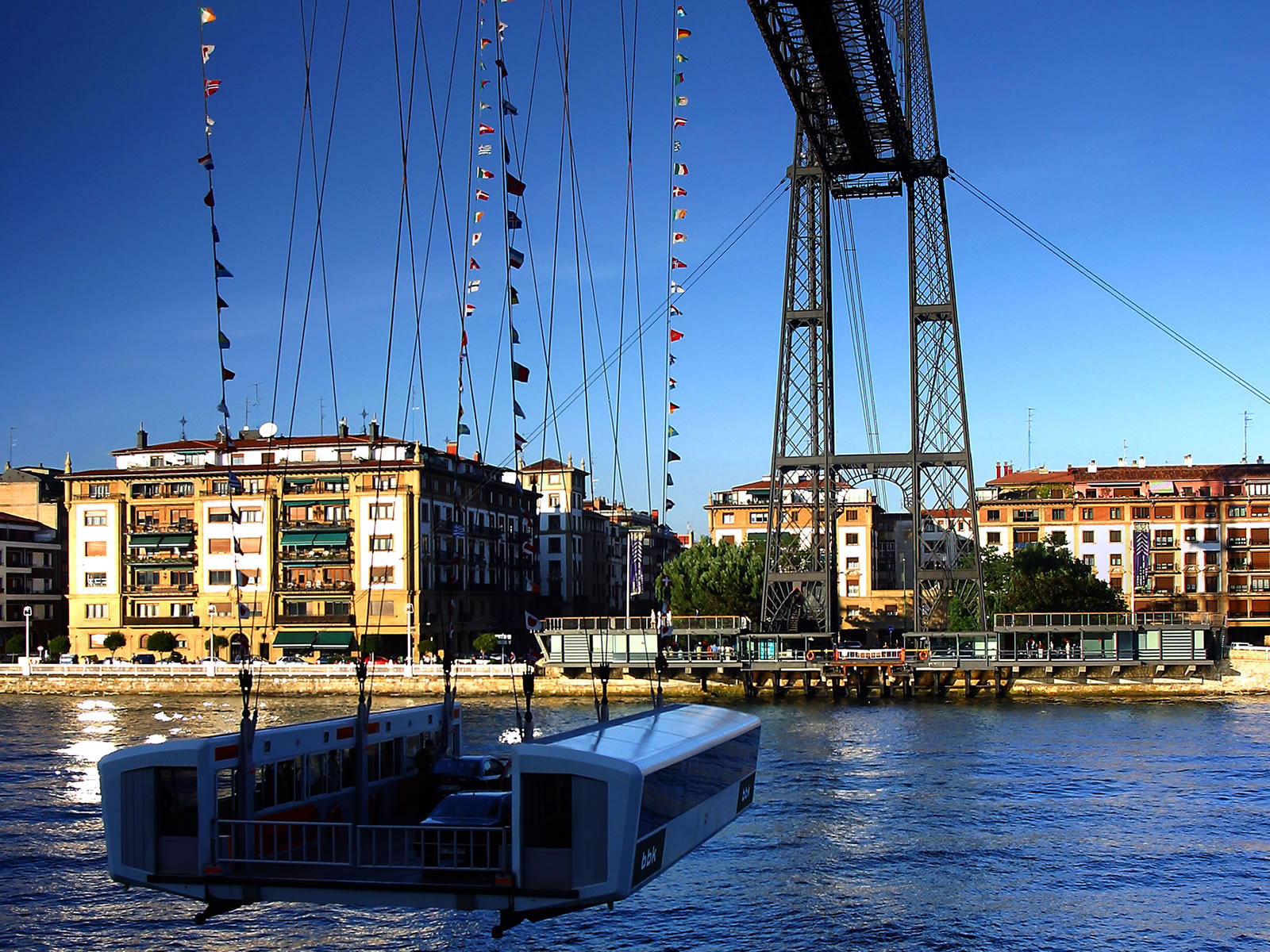 From stately palaces and mansions to simple fisherman homes, Uribe Kosta offers visitors an eclectic mix of picturesque coastline, tranquil residential areas, sail boats, seaside bars and local beaches. These routes will take you along coastal cities for an easy day trip outside of Bilbao.

Getxo is a seaside residential town located on the right bank of the river Nervion with about 83,000 inhabitants. On the west, or left bank of the river from Getxo is Portugalete with about 51,066 inhabitants, both cities are part of the metropolitan area of Bilbao. This route is easily accessible from public transport by taking the Metro from Bilbao to Portugalete or Areeta.

Start from the Vizcaya Bridge or Puente Colgante (Hanging Bridge), which unites the coastal cities of Getxo and Portugalete, the century old bridge is one of the oldest hanging transport bridges in existence. The massive towers that support the bridge allowed for large boats to travel underneath the structure on their way up the river to Bilbao. Built by a student of Gustave Eiffel the bridge combines nineteenth century ironworking traditions with the then new lightweight technology of twisted steel ropes. It was the first bridge in the world to carry people and traffic on a high suspended gondola and was used as a model for many similar bridges in Europe, Africa and the America only a few of which survive. With its innovative use of lightweight twisted steel cables, it is regarded as one of the most outstanding architectural iron constructions of the Industrial Revolution and is considered a UNESCO World Heritage Site. It is still in use today and visitors can cross the bridge using the suspended ferry in a car, or walk along the top of the bridge for breathtaking views of the coastline.

From the Getxo side, stroll along the pathway that hugs the water, passing in front of the official port, the Real Club Marítimo del Abra Marina and the Arriluz light house. As you pass the Marina on your left you will see boats from sailing vessels and cruise ships to small row boats coming and going, to your right notice the well appointed houses, palaces and mansions that wealthy families built from the wealth of the Industrial Revolution.

Today many homes in Getxo still belong to wealthy families, others have been converted into offices and some simply abandoned, watching like sentinels over the sea. Notable buildings include the Lezama Leguizamón Palace built in 1890 and inspired by the Palace of Monterrey in Salamanca, the Atxekolandeta Gallery and Begoña Point built by Ricardo Bastida in 1918. The large terrace covered by columns was built to protect the Cliffside from erosion; they were originally part of the gardens for a mansion owned by Horacio Echevarrieta, a well known businessman and politician.

Continue walking past Ereaga Beach until you arrive at the Old Port of Algorta, a small traditional fishing village with winding cobble stoned streets and fisherman homes – this charming area is a popular meeting place to enjoy pintxos, seafood or drinks overlooking the sea. From here, head back the way you came, or take the steep stairs up from old port city to the top and make a right, follow the pedestrian path back downhill past residential areas and parks with a cliffside view of the sea. You will end up back at the Lezama Leguizamón Palace and towards the path you came from to head back to the metro.

Another route, best by car, is to head to the Usategi Park, pass the Arrigunaga beach until you reach La Galea where you can park, this residential area located along the bluff includes the Andra Mari neighbourhood where the first houses were build in Getxo and the twelfth century Church of Santa Maria.

Along the pedestrian walkway you will find the 1726 Aixerrota Windmill which is now a restaurant and further down the path is the La Galea Fort from the eighteenth century. The seaside bluff is a tranquil but windy spot with parks, pine trees and panoramic views of the Abra coast. There are several kilometres of pathways here to enjoy a quiet stroll. The pathway will take you past the beaches of Gorrondatxe (Azkorri), Barinatxe (Salvaje) and Atxabiribil (Sopelana), all very popular during the summer.

Back in the car, go East and pass Barrika, heading to Plentzia, a fishing town and summer residence for many locals. Plentzia is located in a green valley where the river Butron meets the sea, at the mouth of the natural bay with two beaches. Park in Plentzia and stroll along the port and narrow streets in the old part of town, notable buildings include the town hall which is now a museum, Mugica-Butron tower and Church of Santa Maria Magdalena.

The Mugica-Butron tower was built in the same time as the medieval tower the Butron Castle, located 10 kilometers away in Gatika. The castle was once a medieval defensive tower which was remodelled into a residence in the nineteenth century by the Marques de Cuba, who was inspired by design of Bavarian castles. He surrounded the castle with a park and a moat.

Next to Plenztia and walking distance along the coast is Gorliz, a popular summer beach with petrified sand dunes. The path from there will take you to Cabo Billano and the light house with the ruins of an old defensive battery and bunkers. There are a few bars along the beach, called txirringitos which are open mainly during the summer time.