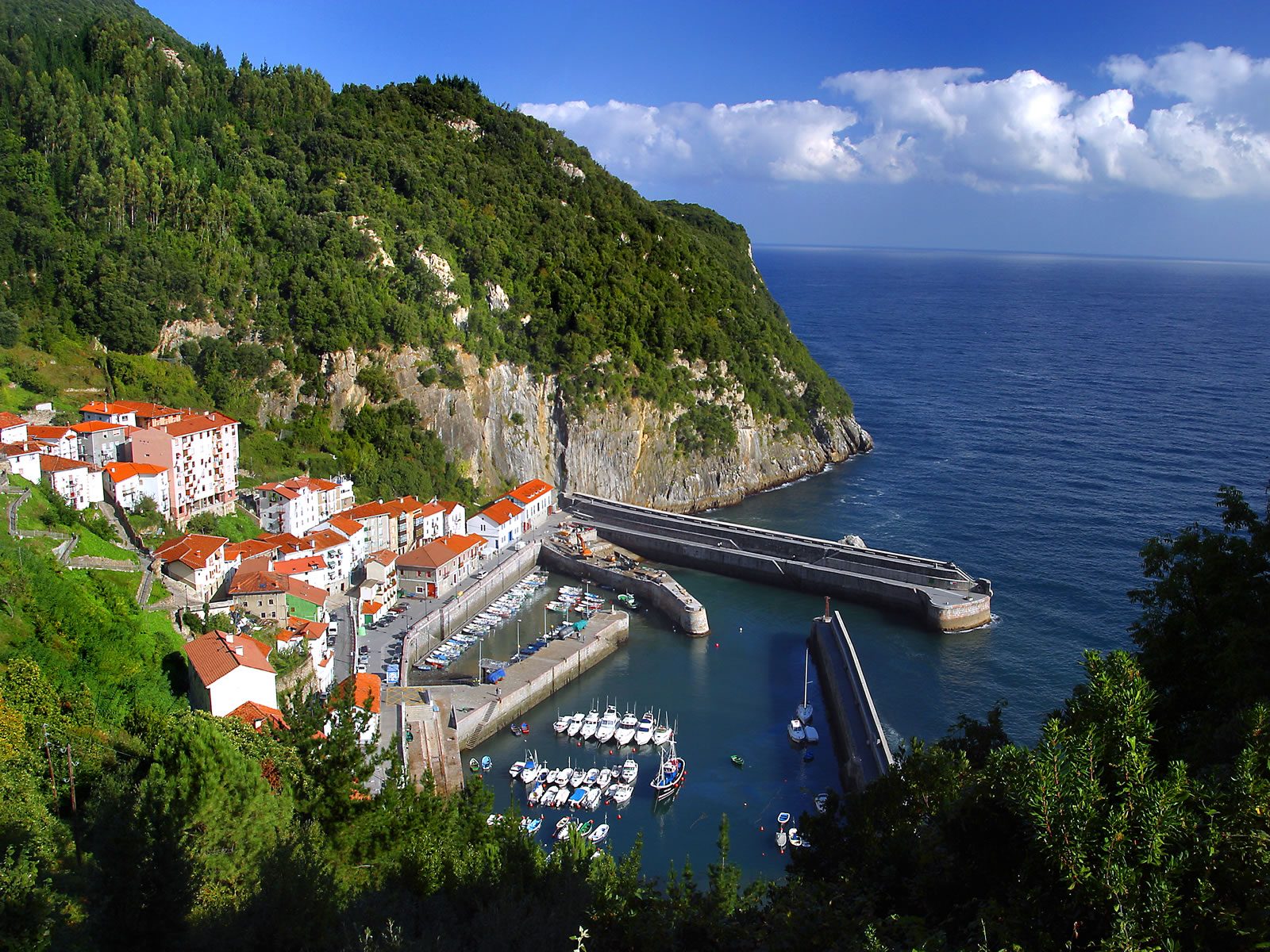 Dotted with small fishing villages, cliffs, beaches, forests, rivers, marshes and meadows, Urdaibai is a national treasure of the Biscay coast. The beautiful estuary and landscape teaming with flora and fauna has been declared a natural Biosphere Reserve by UNESCO.

Our route starts in Bermeo, a well-known fishing village along the Basque coast, home to the largest fishing fleet in this area of the Cantabrian Sea. When the boats are parked in port, the colourful red, green, white and blue ships match the colors of the old fisherman’s houses that line the port. In the Spring, Bermeo comes to life as the fishing season begins, boats laden with mackerel and anchovy are the center of hustle and bustle in the mornings, from the fresh fish market to transport to ladies fixing fishing nets, everything seems to have a role and a place.

Interesting places to visit in town include the historic Tower of Ercilla from the fifteenth century, the Fisherman’s Museum, and the Old Port. You can also check out the Aita Guria, a replica of a seventeenth century whaling vessel that has a small exhibit about the history of whaling.

Hungry? Any of the restaurants in the port serve great seafood, many stores in Bermeo sell excellent quality canned anchovies, the city has a thriving canning industry and the factories based here have a long tradition of making the highest quality canned seafood.

Leaving Bermeo behind, head east three kilometres until you arrive at Mundaka, a picturesque fishing village, famous among surfers for having one the best left waves in the world. Huge swells roll in from the Bay of Biscay and slam into the rocky coastline of the Basque Country. The estuary at Mundaka has created a perfect sandbar which forms hollow waves that can be watched from the town’s harbor.

Built in a natural harbour, Mundaka is filled with beautiful coves and spectacular views. The city is made up of a network of narrow streets with typical fishermen’s houses overlooking the sea. You will also find stately buildings of important families, the coat of arms above the doorway on the second floor were a sign of importance. Next to the harbor, the Atalaya is a vistapoint where you can watch surfers take on the famous “left wave” emerging at the mouth of the estuary.

The most important church in town is the Santa Maria Parish, a magnificent renaissance temple, it was erected in the eleventh century but was destroyed during local wars, the current building was rebuilt in the sixteenth century. Inside is a relic of Saint Peter the apostle.

The Ermita de Santa Catalina, is a nineteenth century church overlooking the sea and surrounded by an ancient fortress wall. Across the water you can spot Izaro Island, Cape Ogoño and Laida beach. The Txorrokopunta dock next to Laidatxu beach is a popular place to swim, fish or spend time watching kayakers and small boats pass along the river.

Between here and Gernika the 12-mile length of the Urdaibai Estuary is considered one of the best preserved wetlands in southern Europe. It is part of the Natura 2000 network of the European Union and also a Special Protection Zone for Birds (ZEPA). Here the Oca River meets the sea, the mouth of the river forms a large marshland that is a natural habitat for birds along their migration path from Africa to Europe.

Follow the road and train tracks running parallel to the estuary which will take you to Gernika. The city has been a symbol of Basque pride for centuries. The oak tree, known as the Tree of Gernika, has served as a meeting place for local leaders since the sixteenth century. Gernika is also notorious for the bombing that destroyed the city in 1937, when German and Italian aircraft sent by Franco reduced the city to ashes. The horror of this tragedy was the inspiration for Picasso’s famous painting Gernika that now hangs in the Prado Museum in Madrid.

Inside Gernika visit the Casa de Juntas or parliament building. The building hosts important official events including the swearing into office of the local Basque president or Lehendakari and Deputy General. In the nearby Palacio de Alegria, the Euskal Herria Museum teaches visitors about culture and traditions of the Basque Country.

Very near Gernika is the Oma Forest, a curious outdoor exhibit where the artist Agustín Ibarrola, painted hundreds of pine trees to create a huge canvas. Nearby is theSantimamiñe Cave overlooking the slopes of Mount Ereñozar. While the cave is now closed you can still access the entrance of the cave and the adjacent interpretive center for a virtual tour of the cave paintings inside. For lunch, a popular local restaurant nearby is Marco Pollo, during the summer month this cerveceria is filled with locals ordering house specialty roasted chicken, fried peppers, paella and more.

The route continues along the right bank of the river from Gernika to Elantxobe. Passing Gauteguiz de Arteaga, on your left you will see the Castillo de Arteaga a medieval style tower built in 1856 by the royal architect Couvrechet, commissioned by Napoleon III and Eugenie. The palace inspired by French Gothic architecture, is now an elegant hotel and Basque restaurant.

Back towards the coast on the other side of the estuary are the beaches of Laida and Laga, spectacularly beautiful places to soak in the coast during the summer months these two beaches have nearby bars that you can also sit and enjoy the view from. Laida at the mouth of the estuary is strongly influenced by the tides, it is popular with families and children because the protected sand bar makes for gentle waters. Laga sheltered by limestone cliffs of Cape Ogoño is one of the most beautiful sandy beaches in Bizkaia, the waves here are great for swimmers.

Behind the cliff of Cape Ogoño is Elantxobe, a picture-postcard village built along the sloping cliffside. The seaside town has a small harbor and is completely surrounded by mountains. The fisherman houses and residences are built into the mountain, challenging gravity and each with a magnificent view of the port and the city below. Notable buildings include the Church of St. Nicholas of Bari, built in 1803 by the Merchants Guild and local fisherman.

From Elantxobe you can see the small island Izaro, an important protected breeding ground for sea birds, ownership of the island was once disputed between Mundaka and Bermeo with Elantxobe traditionally acting as the judge. Bermeo eventually won the dispute by winning a row boat race for the island.

A traditional fiesta is held every year on the 22 of July known as the festival of the Magdalena. A tile is dropped into water and boats race to the island. Ships then head to Elantxobe, to start the festivities and the port fills with boats and locals celebrating onboard and onshore. Later in the day, the mayor gives a symbolic stick to the mayor of Bermeo and the whole party moves to the neighbouring town of Bermeo for those who like to  dance until dawn.