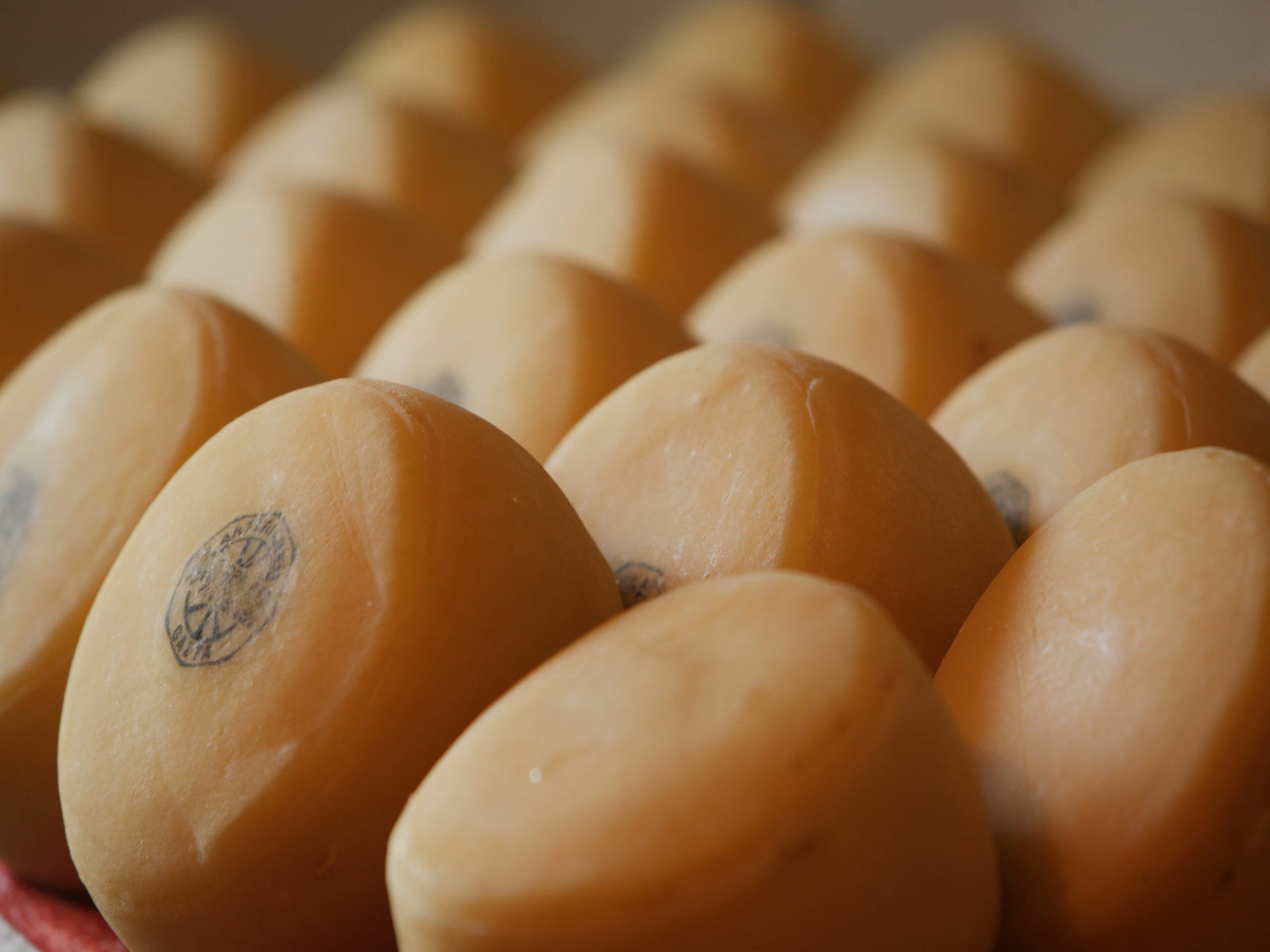 The landscaped interior of the province of Gipuzcoa comes straight out of a postcard. Its lush green valleys surrounded by granite mountains and rustic farm houses are bordered by the Natural Parks Aralar and Aizkorri-Aratz. Serene and peaceful, this landscape is home to flocks of happy local sheep who are responsible for one of the most prized cheeses in Spain, Idaizabal. Visit one of the many queserias to learn about how cheese is made, the best time to visit is from May to July when businesses are in full operation.

Idaizabal cheese is named after a municipality in the Goierri region. The town of Idiazabal is so dedicated to cheese production it has a monument to sheep herding in the San Miguel Plaza, there is even a Cheese museum and tasting room to boast. In the city you will find century old palaces and the parish of San Miguel.

Idaizabal cheese is handmade and covered in a hard, dark brown, inedible rind. The cheese is made from unpasteurized sheep milk, usually from Latxa and Carranzana sheep that populate the Basque Country. It is aged for a few months and develops a nutty, buttery flavor, eaten fresh and often with the local quince jam. Idaizabal is made famous by the local auctions, well known chefs and food critics gather to select the best cheese makers. At the auction half a wheel of the winning cheese can go for tens of thousands of euros.

The most well known cheese auction takes place in Ordizia, the town’s traditional market is one of the oldest running markets in the province, it has been celebrated every Wednesday since 1512. In September, during the local fiestas, the town hosts Idiazabal Cheese Contest in the Plaza Mayor.

Outside the Plaza Mayor the old quarter of Ordizia is worth exploring, notable buildings include the Parish of Our Lady of Assumption, Muxika tower house and monuments of Monument of Andres de Urdaneta and the palaces of Zabala and Barrena. Next to the palaces you will find the Centro de Interpretación de la Gastronomía D’elikatuz, where you can have a cheese tasting.

Fifteen kilometers from Ordizia is Tolosa, the Saturday market called the Mercado del Tinglado is one of the best examples of traditional markets in the region. Tolosa is one of the most important towns in Gipuzcoa, during the eleventh century it was the capital of the province. The city and local gastronomy are equally par excellence, notable buildings include the Puerta de Castilla, the remains of the ancient city walls and the churches of Santa Maria, San Francisco, the sanctuary of Izaskun and the chapels of San Blas and the Santa Clara convent built in 1612.

Tolosa is also known for its rich cultural and musical celebrations, the Carnaval in February is extremely popular with locals. They also celebrate an International Choir Competition, International Puppet Festival and Zumardi Nature Days. There is a permanent open air contemporary art exhibit in town with works from well known Basque artists including Oteiza, Chillida, Ugarte, Basterretxea and Hernández Mendizabal.

Finally, Tolosa is also known for its beans, hailed the most famous bean in Spain, they even have their own festival. The black Tolosa bean has its own denomination of origin, it fades from shiny back to a buttery purple when cooked, its delicate texture is slowly simmered in a pot with chorizo, pancetta, ribs, morcilla (blood sausage), leeks and carrots until it reaches a velvety texture. Alubias con sacramentos, and particularly alubias de Tolosa are a well known delicacy in the area. Best served on cold days the hearty meal is complemented by freshly cooked cabbage and pickled peppers known as guindillas. Look for a menu del dia at one of the local restaurants. If you don’t like beans, the steaks or chuleta is also highly recommended. To finish off a meal, Tolosa is also known for sweet delicacies like xaxus, tejas, cigarillos and chocolate. You can visit the confectionary museum to satisfy your sweet tooth, the Museo de la Confitería Gorrotxategi, will give you a brief overview of the history of traditional sweets and pastries from the region – a sampling in the nearby cafe is offered after the tour where you can also purchase some sweets to take home.

In Besain, a town 15 minutes away you will find the Igartsa monument, a medieval palace built in the thirteenth century, the complex also includes a bridge, wooden press, blacksmith workshop and mill. In the old town, visit the parish church of Santa María de la Asunción and the chapel of Nuestra Señora de Loinatz. An important commercial center of the region, the town has many stores, shops and bars that you can visit. Morcilla or blood sausage is a local delicacy that you should try, the local version includes leeks, carrots or peppers compared to the version from Burgos which is mostly rice.

Steam train in The Steam Train