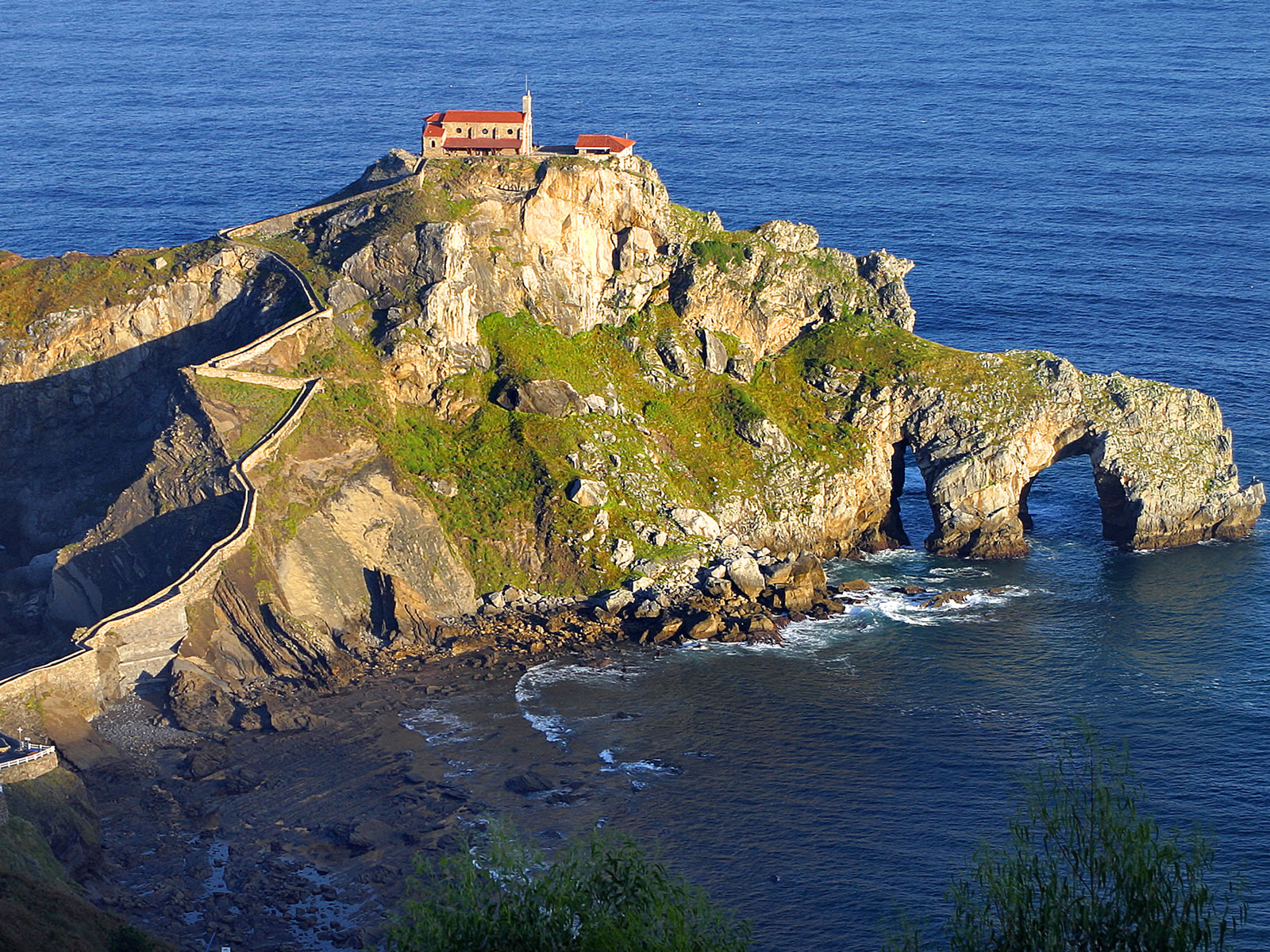 This route starts in the tranquil town of Armintza, in the municipality of Lemoiz, it then passes along a winding coastal route to arrive at one of the most emblematic spots along the Basque coastline the chapel of San Juan de Gaztelugatxe, tradition is to walk up the stairs to the chapel, ring the bell three times and make a wish.

Start in Armintza a tiny town with a picturesque port. Once entirely dependent on fishing, today most of the ships parked here are recreational. During the summer the pier and small beach that appears during low tide is filled with beach goers. Next to the port you will find many bars and restaurants that specialize in fresh grilled fish.

Heading east along the highway, arrive at Bakio, a popular summer town for families from Bilbao. This small coastal town’s population multiplies exponentially over the summer that live in the many seaside apartments that occupy the coast, surrounded by mountains and flanked by two rivers, Bakio’s is also popular with many surfers.

Bakio also has a handful of historical buildings including the parish of Andra Mari, built in gothic style during the tenth century, the church of San Pelaio, rural Romanic from the twelfth century and the chapels San Martin, Santa Ursula, San Esteban, San Cristobal and Santa Catalina. In terms of civil architecture, the baroque palaces of Ormantza and Elexpuru from the seventeenth century, the villa Quinta Torre and the crumbling Palace of Feliena, are building influence by Parisian architecture from the nineteenth century.

Bakio is also well known for its txakoli. The Gorrondona Bodega hosts tours and you can visit the vineyard and learn how they make txakoli, the local white wine. Tastings and food are also available.

In the Artsalde neighbourhood is the windmill Zintziri Errota, which dates back to the year 1650. Before the 1800’s it was used as an iron mill and then converted into a mill. Industrialization eventually made these artisanal factories obsolete. Today, it is a restaurant and ethnographic museum, the mill has been completely restored and visitors can see how corn flour is made using traditional methods.

Continuing on in the direction of Bermeo, the restaurant Eneperi was an old farmhouse that has been converted into a cerveceria and restaurant with plenty of outdoor seating and spectacular views of the coast. The restaurant has a formal dining area, a casual bar filled with delicious tapas and a casual outdoor cerveceria where you can order roasted chicken and pitches of beer to enjoy in the picnic style on benches. Across the street they also have a small museum that features traditional farming artifacts.

Between Bakio and Bermeo, you will see the church of San Juan de Gaztelugatxe, a beautiful chapel built on top of a small steep peninsula that juts out from the rocks. If you stop at Eneperi a small walkway to the right of the restaurant will take you to a vista point or down to the bottom of the hill where you will run into the road that leads to the chapel.

The chapel of San Juan de Gaztelugatxe (gaz-tel-gwa-che) was built in the tenth century in homage to San Juan, in order to pray for a safe journey in the sea. The chapel was built over a former structure which could have been a templar monastery. Inside the church is filled with offerings for sailors who have been saved from shipwrecks. Next to the chapel is a small refuge with a chimney.

Access to the chapel offers spectacular views of the coast line, crashing waves and rocky natural beaches; even on a sunny day visitors get a real sense of the powerful ocean. A small winding path will take you up 237 steps to the chapel. At the top, look for the bell and according to tradition, ring three times and make a wish.

Gaztelugatxe, and the small nearby island of Aketxe are part of a protected natural area from Bakio up to the cape of Matxitxako.

Down the road, heading to Bermeo signs to the light house of Matxitxako (ma-chi-cha-ko) will lead you to the northern most point in Spain – the light house which juts out from the coast line offers wide open views of the ocean. During seasons it is sometimes possible to view migrating whales pass.

Drive along the cost a discover The Marine Sanctuary