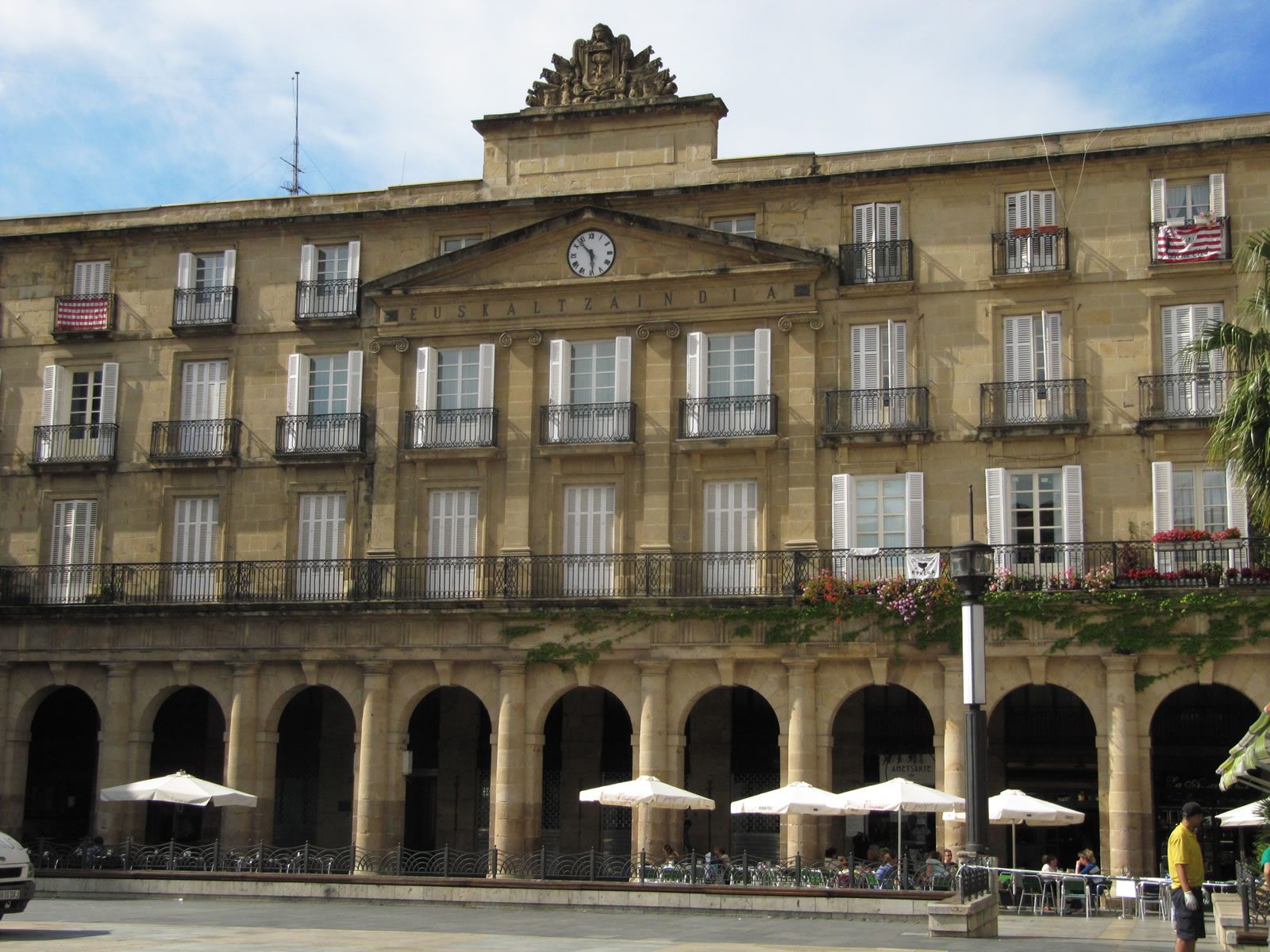 Discover the architectural gems that shaped history of Bilbao.

The Arenal park is a popular meeting place and center for events for music loving Bilbainos. It sits right along the river and is a small architectural gem, originally built in 1925 and rebuilt in 1985 following the floods. Originally designed by Pedro Ispizua, the same author of the Mercado de la Ribera, the Arenal Kiosk is a circular stage with a fan like roof and stained glass ceilings. During warm weather months, the park hosts numerous open-air concerts and every Sunday the municipal band of Bilbao plays a free concert. Underneath the kiosk is a curious hidden bar that serves pintxos and drinks.

In the heart of the Casco Viejo you will find the oldest church in Bilbao, built in the thirteenth century over the remains of an ancient temple is the Cathedral of Santiago (St. James Cathedral). This monument of gothic architecture was once the epicentre of the city. It is today a parish and the headquarters of the Diocese. The cathedral is named after the city’s patron saint, the apostle St. James the Elder. The city lies on the coastal route of the ancient pilgrimage to Santiago de Compostela. Inside the church you will find a beautiful gothic cloister and a portico from the sixteenth century. As a result of sitting on soft ground, the church walls have began to lean.

Between Calle Perro, Pelota and Torre sits the Yohn Palace, also known as “La Bolsa” by the locals, though La Bolsa means “The Stock Exchange” the building was never used for commercial trading. Instead the ornamental baroque palace built in the 18th century which sits over the ruins of a tower has served as a residence and a store. The name Yohn came from an Austrian family when Leandro Yohn rented the palace to install a successful hardware business. It is now a cultural center where visitors can see the ruins of the original medieval construction.

The Plaza Nueva is a meeting place for many locals in the Casco Viejo and a hub for social and cultural activities from concerts to open air theatre and a regular Sunday flea market. Built in 1851, it replaced the old Plaza of Fernando the VII after a long and complicated urban development. It was built in the neoclassical style and has 66 arches and 68 doric columns. The busy restaurants, bars, souvenir shops and coffee shops that line the interior are worth a visit. On Sunday mornings the rastro fleamarket brings together hobbyists and traders of old books, cards, and pets.

A historic and cultural landmark of Bilbao, Arriaga Theatre was first opened in 1890. The eclectic building was designed by the architect Joaquín de Rucoba who was inspired by the Paris Opera house. Since opening day the theatre has undergone several renovations, the first from a fire in 1914 and again in 1983 during the floods which destroyed many buildings in the Casco Viejo. Arriaga has hosted many important plays, operas and leading acts from around the world. There is a small tourism office at the side entrance which can provide maps and helpful information.

This spectacular building was originally built by the architect Ricardo Bastida as a warehouse for storing oils, wines and liquors to quench the thirst of the growing city of Bilbao which was quickly expanding to the Ensanche at turn of the 19th century. Designed in a classic modernist style it was built using exposed red bricks, iron and reinforced concrete and opened in 1909. In the 1970’s, a new and larger warehouse was built and the Alhondiga was abandoned, for many years and forgotten by residents, until 1999 when it was turned over to the city as public property of cultural interest. The Alhondiga reopened its doors in 2010 as a cultural center occupying a 43,000-square-metre site and became the first public work in Spain redesigned by famous interior designer Philippe Starck. Inside visitors can marvel at the hollow atrium and three giant cubes supported by 43 unique and specially designed columns that represent different types of construction material and artists from all over the world. The Alhondiga houses movie theatres, a gym, swimming pool, library, meeting rooms, a store, restaurants and art galleries that feature public works. The cultural center has a calendar of activities each month from independent cinema to modern art, cooking classes, chess contests and special events. Group tours of the building are available, visitors should inquire at the information desk for reservations.

Opened in 1892, the Town Hall or Ayuntamiento de Bilbao is also the work of the architect Joaquín Rucoma who designed the Teatro Arriaga. The style of the building is eclectic with neo-baroque details. Inside the building, no expense was spared and the meeting rooms were built to impress – particularly the Salon Arabe, this Moorish influenced room is beautifully detailed, the chamber meeting room, lobby and stairs are neo-renaissance. Many notable artists contributed to the decoration of the interior, while the furniture is French from Bordeaux and the lamps from Paris. The main façade of the building faces the river, its rectangular shape gives elegant perspective and rises four stories high with a clock and bell tower on top. New annexes to the building are located next to and behind the elegant building. On Saturday’s and Sunday’s many weddings are celebrated at the city hall and you will find families all dressed up taking photos in front of the building.

The current headquarters of BBVA (Banco Bilbao Vizcaya Argentaria, S.A.) bank is located on the Gran Via, on the corner of Alameda de Mazarredo, the imposing building built in 1912 by the architect Pedro Guimón, has undergone several renovations. Inspired by classic structures its giant columns are decorated in Corinthian style, if you look up you will find a temple dedicated to the god Mercury, the patron of financial gain, commerce and eloquence which sits on the top of the building.

In San Nicolas Plaza is the original location of the Bank of Bilbao (BBVA). Built in the middle of the nineteenth century by Eugéne Lavalle in a French style and reformed by Severino de Achúcarro, the building is used today as an exhibit space and historical archive, the building is still owned by the bank.

Built in 1890 by architect Severino Achúcarro, the Bidebarrieta Central Library has witnessed the cultural history of Bilbao over the past two centuries. The building’s eclectic architecture is representative of Bilbao in the late nineteenth century, with a Baroque facade and a stunning oval hall filled with romantic character. The library was once the meeting place for politicians and intellectuals of the time, it was originally built to be headquarters of a liberal society known as “El Sitio.”

On the corner between Columbus and Alameda de Recalde Larreátegui stands the Montero House,popularly known as the “Gaudí House” it is a historical monument and the only example of modernism in Bilbao for residential use. The ground floor also has commercial shops. Luis Aladrén, who built the Palace of the Provincial Council of Vizcaya, designed the building in collaboration with Jean Baptiste Darroguy who worked on the spectacular facades. From its art nouveau balconies, verandas and balustrades, the wavy lines in the building design are reminiscent of Gaudi’s works.

Along the Gran Via, very close to Plaza Moyua is the Ramon de la Sota Palace. De la Sota was one of the wealthiest businessman in the city, as a monument to his wealth he began construction of a grand palace at the turn of the century.
The classic building, designed by architect Manuel María de Smith in 1919, stands out from neighboring buildings with an elaborate façade filled with towers, turrets, spiers and arched galleries. The building today is used for offices.

In Plaza Moyua, at the center of the financial and commercial district of Bilbao, lies the Hotel Carlton, built and designed by the Basque-English architect Manuel Maria Smith in 1926. Its white façade and location make it one of the most majestic buildings in town, the architectural and cultural significance of the building is tied to rise of the local government. The building was once home to the Basque government during the Spanish Civil War. The balcony that overlooks the plaza has witnessed many important speeches; demonstrations and events in the past century.

Overlooking the Arenal Park, sits St. Nicholas Church, built in the mid-eighteenth century in honor of the patron saint of fisherman. The church was designed by Ignacio de Ibero Gipuzkoa and Erkizia, it has a moderate baroque style and is home to some excellent altarpieces and sculptures by Juan Pascual de Mena. The waterfront location of the church along the sandy banks of the Arenal was originally the location of a small chapel in the 1400’s. The soft ground in the area made building difficult and the church was built and restored many times until it was finally completed. On the side of the church, look for the oval plaque that marks the water depth which destroyed much of the Casco Viejo during the 1983 floods.

Palace of the Basque Government Bilbao

A grand palace built in the late nineteenth century by the architect Luis Aladrén, admire the stunning exterior of one of the most interesting examples of eclecticism in Spain. Sitting regally along the Gran Vía, the building is the headquarters of the Provincial Council of Bizkaia, the governing body of the province. Group visits are allowed by appointment.
The interior of the palace is adorned with a grand staircase and decorated with marble, wood, stucco, mirrors, plaster, vases, ceramics, stained glass and paintings by famous painters of the late nineteenth century. The building recently underwent significant renovation to bring it back to an impeccable state.

Located along the river on Campo Volantín, Olábarri Palace was designed by architect Julian de Zubizarreta in 1894 as the residence of Jose Maria Olábarri, a prominent businessman of his day. His family lived there until the 50s, when the building was then used as the British Institute, and then afterwards it was used as offices for the Port Authority of Bilbao.
With an eclectic style of both French and English influence, the building has over 6,000 square meters, spread over four floors.

Inaugurated in 2011, the imposing stealth glass and steel building has forever changed the skyline of Bilbao. The tallest building in the city, it measures 165 square meters in height and has 41 floors of office space. The impressive obelisk is designed by renowned architect Cesar Pelli, author of the famed Petronas twin skyscrapers in Kuala Lampur.
The building offers sweeping views of the city and river. The shape of the building is reminiscent of the bow of the ship, at its base the building landscape has playful curves of glass like waves.

Originally opened in 1902, the theatre was recently remodeled and expanded in 2010. Designed by architect Alfredo Acebal, the ornamental facade was commissioned to Jean Baptiste Darroguy.
Popularly known as El Campos y la Bombonera, it is located along Bertendona street, in the Ensanche district of Bilbao. The theatre represents an important piece of modernist architecture in the Basque Country, the top floor has a modern restaurant with special event menus.

Learn about Bilbao’s Museums next.