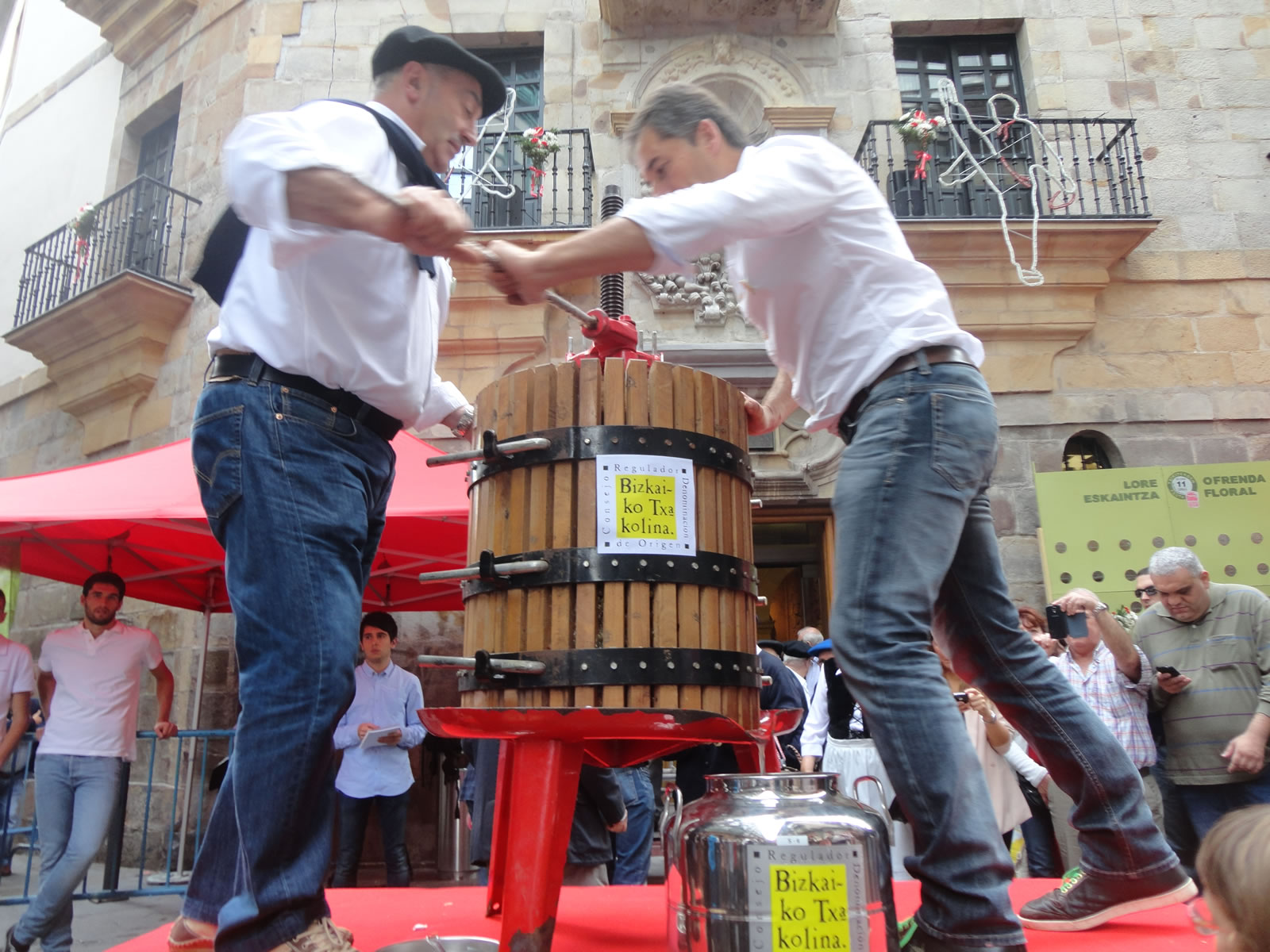 Every year since 1964 Bilbao celebrates the Txikitero Fiesta on October 11 in memory of Don Epi, a parish priest of Bilbao’s oldest church, the Cathedral of Santiago. Don Epi was fond of socializing with good friends over wine – today known as bar hopping this popular activity practiced all over Spain. In the Basque Country, where nothing is done lightly, they have taken this to the next level and hold a celebration in homage to Don Epi and the original, hard working Basque who would gather in their free time to share wine, stories and songs.

In the old quarter of Bilbao where three streets intersect Calle Santa Maria, Pilota and Txakur, locals gather every 11th of October to commemorate the Txikitero Fiesta which is celebrated on the same day of Begoña, a beloved patron saint of Bilbao, who is also referred to as the “amatxu” or mother of Bilbao. At 12 noon there are parades and offerings as the first wine is poured, and at 8 p.m. in the evening locals gather to sing traditional songs including, “La salve de los Txikiteros,” the traditional ballad of the txikiteros.

“Txikito” is a Basque word that means “small” it is used to refer to a short heavy glass that weighed almost half a kilo. The peculiar glass was traditionally used to drink a short pour of red wine. Groups of friends would gather to visit several of their favorite bars and drink from this iconic glass, these men were called “txikiteros”.

The first rules of Txikitero’s

The “Txikito” is the traditional short glass of red wine, pronounced, “chi-kee-toe”.

Once customary in Bilbao over a century ago, and also called the “vaso de Bilbao” they used to be very common in local taverns, but due to their hand crafted nature and limited production, the original Txikito glasses have been replaced with modern glassware.

The “Txikiteo” was a crawl from bar-to-bar and its protagonists were called, “Txikitero’s”. The original Txikiteros were factory workers, miners, fisherman and farmers. They were a no frills group of old friends who made tradition out of enjoying many rounds of wine and a solid slam of the glass on the bar before moving on to the next tavern. Before cosmopolitan’s or fruity piña colada’s, the Txikito was the original shot glass of the working class.

Today’s Txikito glasses are made using traditional methods. The glasses are shaped following the inspiration of the old European glasses from 1917. An authentic Txikito glass is solid and heavy, it features a thick 5mm rim, shallow base and weighs in at over 600 grams, designed to endure the most demanding bar crawl.

Learn about Semana Grande Bilbao next.